You are here: Home / Entertainment / Just Go With It (Movie Review) 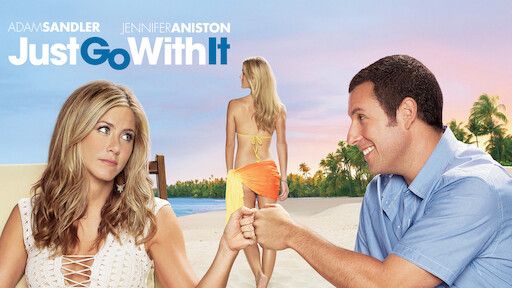 After I posted the movie review of Murder Mystery starring Jennifer Aniston and Adam Sandler, the response I got was overwhelming. Well, I know that both actors are loved by many, but this isn’t their first movie together; they had been together in another movie too, Just Go With It (2011). So today I have a review of this movie.

Just Go With It is a movie starring Adam Sandler, Jennifer Aniston, and Brooklyn Decker as the main characters. The plot centres around a successful plastic surgeon, Danny (Adam Sandler), who uses a fake wedding ring and a fabricated story about being divorced in order to avoid commitment to women. However, when he meets Palmer (Brooklyn Decker), a woman he falls for, he realizes that she won’t date him unless he’s divorced. So, he asks his loyal assistant, Katherine (Jennifer Aniston), to pose as his soon-to-be-divorced wife in order to prove to Palmer that he’s single. They travel to Hawaii, pretending to be a divorced couple, accompanied by Katherine’s children, who help keep the charade going. Along the way, the group faces various comedic obstacles and misunderstandings and ultimately must decide whether to keep up the lie or come clean.

According to many movie reviewers, it is a hilarious romantic comedy starring Adam Sandler and Jennifer Aniston. The chemistry between the two leads is undeniable, and their comedic timing is spot-on. The supporting cast, including Brooklyn Decker and Nicole Kidman, also adds to the humor and charm of the film. The plot is enjoyable and easy to follow, and the film’s use of Hawaii as a backdrop is beautiful and adds to the overall feel-good tone. Overall, “Just Go With It” is a great choice for a lighthearted and entertaining movie night.

However, according to many critics, “Just Go with It” is a typical Adam Sandler comedy that relies heavily on cheap jokes and slapstick humor. The plot is shallow and predictable, and the characters are underdeveloped. Jennifer Aniston and Brooklyn Decker are wasted in their roles, and their performances are wooden. The film’s use of Hawaii as a backdrop is also shallow, and the film seems to be exploiting the culture without any real understanding of it.

If you want my verdict, I saw this movie years ago and, as I really enjoyed the movie, in terms of rating, I will give the movie 4.1. The movie is also available on Netflix.